Gazprom International Children“s Social Programme Football for Friendship 2019 International Forum was held in Madrid on May 30. For the first time, the Seventh Season of the programme has united the experts from around the world.

(Madrid, 30 May 2019) The Seventh Season of the programme has united the experts from around the world: professional football coaches, children“s teams doctors, invited stars, journalists of the world“s leading media, and representatives of the international football academies and federations.

The Chairman of the Board of Directors of Gazprom Viktor Zubkov, Real Madrid and Brazil Legend, World Cup winner and 3 times UEFA Champions League Winner Roberto Carlos, the Young Ambassador of the programme Ananya Kamboj from India, and Soccer Barcelona Youth Academy CEO Miquel Puig gave their speeches at the opening of the 2019 International Football for Friendship Forum.

This year, the Forum united 10 theme sessions dedicated to the topical questions of the children“s and youth sports development. The experts have discussed the methods of training, management of children“s sporting events, work on prevention of traumas in children“s football, features of the dialog between the child and the parents, and methods of encouragement of honour and fairness. Special attention was paid to what ways of professional development of children“s coaches exist now.

In addition, a panel discussion dedicated to the impact of the media on the development of the children“s football took place within the framework of the Forum with the participation of journalists of the world“s leading media. Among the key speakers of the event were the Chief Editor of the Sport-Express (Russia) newspaper Maxim Maximov, Euronews (France) TV Channel Sports Correspondent Paula Vilaplana, Radio Monumental (Bolivia) Director Jose Dehesa, the Editor of the Sports News Show on RTS Serbian National Broadcasting Network Stefan Bendic, football internet portal Syrian Soccer Portal (Syria) Chief Editor Al-Jabi Nadim, and others. The total number of the journalists who participated in the press conference exceeded 150 people, including successful young bloggers Kailem Williamson from Great Britain and Simone Filippone from Italy, who shared with the guests their experience of promoting children“s football in their native countries. „I am happy to participate in the events of Football for Friendship. It is a unique social initiative of Gazprom that contributes enormously to the development of children and youth football around the world. Uniting the participants in the 211 countries it supports global promotion of sports among the younger generation. The educational initiative of the programme us aimed at improving coaches“ skills, which allows to take the training of young players around the world to a higher level,“ said Roberto Carlos, Real Madrid and Brazil Legend.

„It“s a great honor for me to participate in the opening of the 2019 International Football for Friendship Forum! I am so happy that this year I was lucky to share the stage with such a legendary football player Roberto Carlos. Thanks to communicating with the adults of such a level I feel how much responsibility it is to be a Young Ambassador of the key values of Football for Friendship. In the three years I have participated in the project, I realized that any goal can be achieved. The main thing is to follow your dream and believe in yourself. Then, everyone will be able to show the best they can do,“ said Ananya Kamboj (aged 14), Young Ambassador of the programme.

Information:
The International Children“s Social Programme Football for Friendship has been implemented by Gazprom since 2013. The key values promoted by the programme’s participants are friendship, equality, fairness, health, peace, devotion, victory, traditions, and honour. Football for Friendship is supported by the UEFA, FIFA, International Olympic Committee, football federations of different countries, children“s international charity funds, famous athletes, and the leading football clubs of the world. For the previous seasons, the programme has brought more than 6 thousand participants together and acquired over 5 million followers including famous athletes, artists, and politicians. 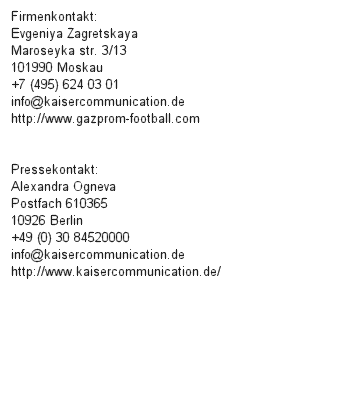